Will you know when to fold ’em? | selling a business

If you are a business owner, rather like card players, sometimes you need to know when to fold ’em.

Susan was an owner in the 1980’s who built a fabulous big box children’s clothing store. Huge selection, deep discounts. She made millions of dollars and people drove 20-40 miles to her store in the exurbs.

Then the major brands started their own off-price stores, discounting their extra inventory. They called them “Outlets”. Susan had a hard time competing.

It only took a few years for Susan to see the writing on the wall. She had to sell the business to a larger entity to roll out into a chain, or close.

She thought long and hard about it. In the end, she decided to close. She could not bear the thought of anyone else running “Susan’s”, and possibly ruining it. It was her name on the door after all.

Instead she threw a party, inviting in all the sales reps of the brands. Paid all her bills and took good care of her staff as well.

She had made millions of dollars and did not need the business anymore. Susan knew when to fold ’em.

If you re a business owner who’d like to think more deeply about your business, try the What’s Next Self-Assessment for only $99.00  (you can save $25 with this coupon code: save25 )  LEARN MORE 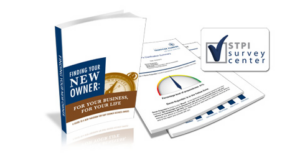